Do Lordship “Salvation” Folks Deny the Resurrection and Christ’s Proclamation, “It is finished”? 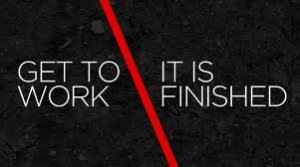 As Resurrection weekend approaches let us analyze the terrible lie and denial by those who teach Lordship “Salvation.” Do their false teachings deny the Resurrection and Christ’s very words?

God’s salvation requires no more than believing the Gospel and then believing in Jesus Christ alone for our salvation. Therefore we conclude that the Lordship “salvation, faith, probation” (LS) folks cannot sincerely believe Christ’s last statement on the cross, “It is finished…” John 19:30b

They must deny the death, burial and resurrection as being Christ’s all sufficient sacrifice for sin for every person in the world, past, present and future. The Lord God sealed His Promise of Christ’s words, “It is finished”  when He raised Jesus Christ from the grave three days later. The Resurrection is proof. LS folks therefore deny His Gospel of Salvation by Grace through their teaching. They demonstrate their misery not knowing that JOY that comes with God’s assurance.

Here is such a denial, according to the guru of Lordship “salvation” :

“Salvation isn’t the result of an intellectual exercise. It comes from a life lived in obedience and service to Christ as revealed in the Scripture; it’s the fruit of actions, not intentions. There’s no room for passive spectators: words without actions are empty and futile…The life we live, not the words we speak, determines our eternal destiny“ (John MacArthur, Hard to Believe, p. 93).

Heresy !!! Thus says JMac as he proudly denies the sufficiency of God’s Grace alone, our faith alone in Jesus Christ alone, to save all who believe in Him. He is claiming null and void Christ’s last words on the cross, “It is finished.”  (“Finished” is the Greek word Teleo meaning complete, executed, concluded, discharged (a debt) :- accomplished, make an end).

“And if Christ be not risen, then is our preaching vain, and your faith is also vain [useless, empty)]” 1 Corinthians 15:14

You may have “heard” the Gospel and you may have “come to the knowledge of Christ” or “know” the Gospel but you alone must, at some time, make the decision to believe in Jesus Christ, that He died and was resurrected as your substitute, in your place, for your sins, that He is your Savior. Then, He freely GIVES you the Gift of eternal Life (forever)..
Study John 3:16-18 “.. He that believeth is NOT condemned…”

Christ IS RISEN and coming again!!!

“He is not here, but is risen: remember how He spake unto you when He was yet in Galilee, Saying, The Son of man must be delivered into the hands of sinful men, and be crucified, and the third day rise again.”

“GREAT JOY” is an understatement!! Imagine yourself being there with them. Imagine their circumstances, the Person they trusted, worshiped and followed had just been humiliated, crucified was dead and buried. They visit the tomb expecting to complete their mourning. Then they see the tomb empty and hear the words, “He is not here: for He is risen.” HE IS RISEN! Just imagine the JOY!

The following has been called “The Gospel in a Nutshell”:

Salvation by God’s Grace is understanding and believing that we are imperfect; that God calls this sin and that our sin requires a death penalty. But God with love beyond infinity, loved us so much that He sent His Perfect Son, Jesus Christ, to make that death penalty for the whole world. He came to the Jew first and then the Gentile so that all who would believe or trust in Jesus would have everlasting life in Heaven with Him. Jesus, He fulfilled the law and paid the death penalty we humans owe. He did that and arose from the grave just as He promised. Now the responsibility is upon us. Do we trust Jesus alone as our Savior, our complete and all sufficient Savior, apart from depending upon our good works, our promises, our commitment to serve or a life lived in obedience? If we do trust Jesus alone as our Savior, God’s Word says we HAVE everlasting life, guaranteed.

Dear friend, at this time of year when we remember the death, burial and Resurrection of Jesus Christ, perhaps you do not know for sure you possess eternal life in Christ. If you are not sure, please believe Him and trust or rely upon Jesus alone as your Savior to deliver you to Heaven; to give you eternal life. It is not thorough an organization, behavior, church or your good works, but simply Jesus alone. I pray you will make this one time decision as it is the most important one you will ever make during your entire life on this earth.

Blessed be the God and Father of our Lord Jesus Christ, which according to his abundant mercy hath begotten us again unto a lively hope [guarantee] by the resurrection of Jesus Christ from the dead,“ 1 Peter 1:3

230 responses to “Do Lordship “Salvation” Folks Deny the Resurrection and Christ’s Proclamation, “It is finished”?”