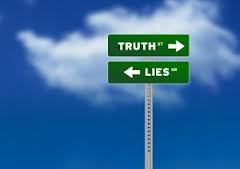 3.  Arminianism (denial of eternal security) – salvation, once attained, must be maintained by adherence to God’s laws.
4.  The Perseverance of the Saints (denial of assurance) – maintains that genuine saving faith will always produce visible and lasting results in a person’s life; therefore, serious or habitual sin would constitute proof that true conversion was never experienced – that the person was never really saved

I have seen these perversions used in a wide variety of ways, as I am sure you have.  While it is critical that we continue to fight these obvious errors, I would like to discuss some more colloquial lies.

If it Seems Like it Should be True, it is True

The “seems  likes” are situations in which a person substitutes his sense of justice for God’s justice.  I encounter this one a lot.  It is popular, because it appeals to our humanism.  Some of the common forms are:

I think that people often fall into this trap because they are afraid that someone will abuse Grace (that is, get by with something).  The most ironic thing about this is that perversion of Grace is the ultimate abuse of Grace.

Believing to Avoid Hell is Not Legitimate Salvation

I have heard pastors and others say that someone can’t be saved if his motive is simply to be saved from going to Hell.  If this is the case, then there would be little purpose in mentioning Hell in the Bible.  This is the old “my motive is better than your motive argument.”  The Bible is silent as to motives for being saved.  There is no room for boasting before God.

Someone Must Desire a Relationship with Jesus to be Saved

I hear this one a lot.  It is often espoused by those who confuse loving Jesus and serving Jesus with belief in Jesus for salvation.  But,  the eternal destiny of someone who is saved, but has nothing to show for it (1 Corinthians 3) versus the eternal destiny of someone who has not trusted in Jesus as Savior (Matthew 7: 21-23) is different.  The “worst” Christian goes to heaven.  The most committed “Christ follower” who never puts his faith in Him alone does not go to Heaven.

One Version of the Bible is as Good as the Next

I’m going to let you in on something:  Satan plays dirty!  There is no rule that prevents him from perverting scripture.  I hesitate to do this, because I don’t want to bring attention to rogue versions of the Bible.  But, here goes:

KJV  Ye see then how that by works a man is justified , and not by faith only.
NLT  So you see, we are shown to be right with God by what we do, not by faith alone.

The NLT “translation” totally violates God’s Gospel of salvation by Grace through faith.

The NIV translation will not call turning from evil ways “works”.  This error would help confuse the matter as to whether turning from sins is a work  The NIV also has removed all Old Testament references  to God repenting.  This would help in pushing the error that repentance always means repenting from sins

KJV  I tell you, Nay: but, except ye repent , ye shall all likewise perish .
NLT  Not at all! And you will perish, too, unless you repent of your sins and turn to God

The NLT version reduces the Gospel to a straight-up gospel of works.

The theory of  “eat the meat and spit out the bones” could be roughly translated as “aside from that Mrs. Lincoln, how was the play”.

This lie helps keep books such as “The Hole in the Gospel” and “Radical” in publication.  The only logical outcomes of such books would be to cause the faithless to exercise more faith in their own works, or to cause the poorly grounded babe in Christ do be deterred or distracted from his faith.   The mature faithful should be sufficiently discerning to know these books are destructive.

This is for the fence riders who would like to think that salvation is by Grace through faith, but they want to hold onto “turning from sins for salvation” and the like, just in case they are wrong.  Faith in Christ plus something else is not the same thing as faith in Christ.

This one includes “if it is old, it must be right.”  Nothing could be further from the truth. This is usually used in reference to old-time preachers who have gone on to their reward and who promoted LS, Calvinism and  the like.  Its companion lie is that salvation by unmerited Grace, appropriated by simple faith in Christ is some newfangled notion being promulgated by latter-day apostates.

All of the Nice People are Saved

It is hard to swallow that so many of the kind, considerate, gentle (among the many positive attributes that I don’t consistently possess or display) people who are wrapped-up in these lies may by unsaved.  It is also hard to fathom how one can obtain post-graduate degrees in theology and miss the central theme of Christianity!  It is hard to believe that people would dedicate their lives in churches teaching lies.

But, as the songwriter Bob Dylan said  – “the executioner’s face is always hidden.”

Conclusion
Many of the mainline denominations, evangelicals and writers use these lies, in different measures and combination, in coming up with their deadly cocktails.  These are just a few that I could think of.  There are lots more.  Be on the lookout for them.

No Tricks — The Truth About  Heaven