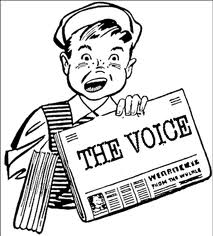 Please beware — if you have been sold on the idea that you want a Bible for your kids — or yourself that is “easier to read,” BE VERY CAREFUL. Thomas Nelson Publishers has gone down into the depths, publishing a new “Bible” called The Voice which, from the following report, decimates portions of God’s Word by omitting the words, “Jesus Christ.”

A new translation of the Bible into English does not contain the name “Jesus Christ” nor the word “angel.” It also prefers the word “emissary” over “apostle.”

The Voice, a Bible (sic) that replaces “Jesus Christ” with terms like “Jesus the Anointed One,” had its complete edition released by Thomas Nelson Publishing last month.

Frank Couch, Thomas Nelson’s lead editor on the project, told The Christian Post that the purpose of The Voice was to make the Gospel message easier to understand for modern audiences.

“When translators are limiting themselves to conveying the complete essence of a word from the Hebrew or the Greek with one English word they have difficulty bringing in the nuances held in the original language.”

Because other translations have more literal renderings, Couch believed they are “why it has been necessary for commentators and preachers to spend so much time explaining what the words in the original language mean before the lay reader can understand fully a text of Scripture.”

So now we are to trust Nelson Publishers to interpret God’s Word for us?? I think not. There are already too many perversions of God’s Word on the market now.

Study to shew thyself approved unto God, a workman that needeth not to be ashamed, rightly dividing the word of truth.” 2 Timothy 2:15

How could anyone (except one who knows not the Bible) publish and market a “Bible” that eliminates the Name of Jesus Christ. We are to rightly divide [correctly dissect] the Word of Truth, not delve into a poor paraphrase of what some book salesman thinks is “easier to read.”